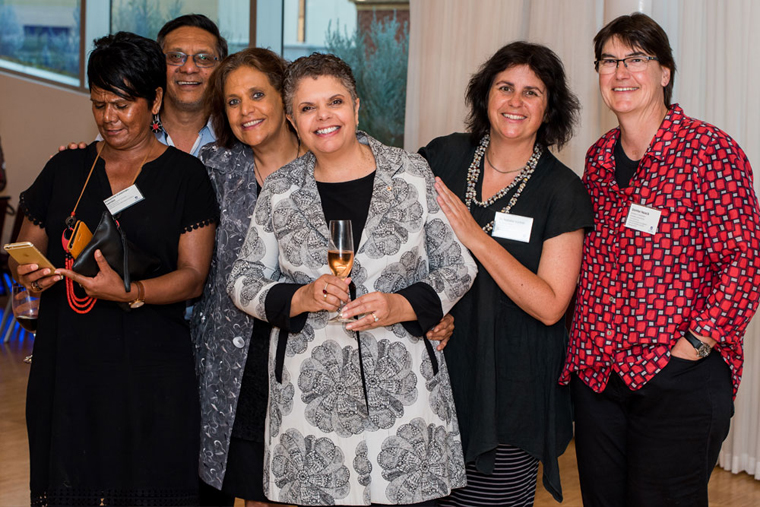 Alumni came together for a reception at the University of South Australia's Pridham Hall on the 6th of December 2018, where guests were delighted with an impromptu performance by special guest Deborah Cheetham AO DUniv.

Deborah is a Yorta Yorta woman, soprano, composer and educator and pioneer in the Australian arts landscape for more than 25 years. Deborah established Short Black Opera as a national not-for-profit opera company devoted to the development of Indigenous singers. The following year she produced the premiere of her first opera Pecan Summer. This landmark work was Australia’s first Indigenous opera and has been a vehicle for the development of a new generation of Indigenous opera singers.

See photos from the event here.

Alumni gathered for a reception at the Bradley Forum at the University of South Australia's City West campus on 30 November to hear from guest speaker, Dr James Charles, the 2017 National NAIDOC Scholar of the Year, who studied his Bachelor and Masters of Podiatry at UniSA. Dr Charles was until recently an educator and researcher at Charles Sturt University and has just been appointed to a professorship at Deakin University. Dr Charles (left) is pictured with Janine Mohamed, Dr Lewis O'Brien, AO FUniSA, Harry Miller, South Australia's new Commissioner for Aboriginal Engagement, and Professor Peter Buckskin, PSM FACE, Dean of Aboriginal Engagement & Strategic Projects at UniSA. 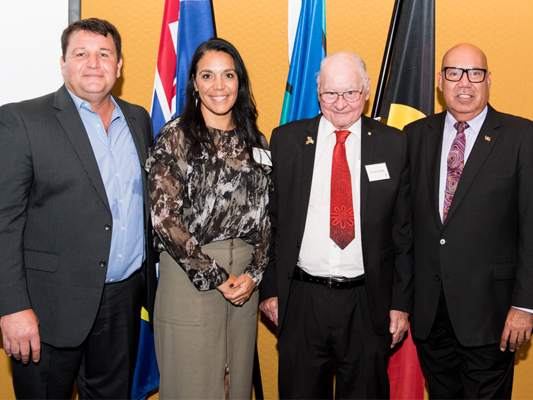 On 29 October 2016, alumni from the University of South Australia's Aboriginal Teacher Education Program (ATEP), from the early 1980s onwards, gathered for a reunion at the Bradley Forum at UniSA's City West Campus. ATEP was founded by Professor Paul Hughes AM, FACE, (pictured seated front centre) a Yunkunyatjatjara/Narunnga/Kaurna Aboriginal Australian, who is  now an Emeritus Professor at University of South Australia. The event was initated by Christine Ross (pictured back, fifth from right) (Bachelor of Education 1999), Indigenous and Diversity Manager at Aroona Alliance in Perth. Vice Chancellor Professor David Lloyd, Deputy Vice Chancellor:External Relations and Strategic Projects, Nigel Relph, and PVC:Aboriginal Leadership&Strategy, Professor Irene Watson were among the guests. 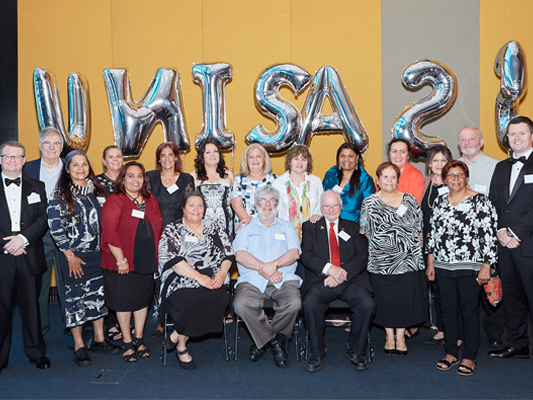 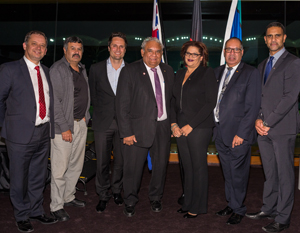 Australian community leaders joined more than 150 special guests and University of South Australia alumni for a historic celebration to launch of the State’s first Aboriginal and Torres Strait Islander Alumni Chapter, the Deadly Alumni, on 8 August.

The gala event was hosted by Professor Peter Buckskin, PSM, FACE, Dean of Indigenous Scholarship, Engagement and Research at UniSA.

He was joined by Chapter patron Dr Tom Calma AO,
a UniSA alumnus and Chancellor of the University of Canberra, and Deadly Alumni champions, Janine Mohamed, Chief Executive Officer of the Congress of Aboriginal and Torres Strait Islander Nurses and Midwives (who joined the dinner via video link), and community leader
Klynton Wanganeen.

Provost and Chief Academic Officer, Professor Allan Evans, who represented the Vice Chancellor at the event, acknowledged the Deadly Alumni Chapter as a great and enduring example of the success and achievement of the University’s Aboriginal and Torres Strait Islander graduates and a network of support for the future.

“It’s important that we keep in touch. We want your ideas and your input into our future plans, particularly in building UniSA into what we hope will become the university of choice for Aboriginal and Torres Strait Islander people,” Professor Evans said.

The event also acknowledged the life’s work of one of the original Deadly Alumni champions, the late
Peter Varcoe, who completed a Bachelor of Engineering (Electrical and Mechatronic) with Honours at UniSA and was given the title of first Aboriginal Graduate in the area of Engineering. He worked tirelessly in committees and mentoring programs to help close the gap in education outcomes for Aboriginal and Torres Strait Islander people.

Prof Buckskin announced the establishment of the Peter Varcoe Memorial Fund in his memory.

The dinner was held at the Ian McLachlan Room at the Adelaide Oval Function Centre with entertainment provided by the traditional fsmily dance group, the Kuma Kaaru, and the CASM (Centre for Aboriginal Studies in Music) band.

If you wish to contribute to the Peter Varco Memorial Fund please contact Juliette East on 8302 2752.

To become a member of the Deadly Alumni Chapter, please register by ticking the appropriate Aboriginal and Torres Strait Islander Alumni box and update your contact details.