About the Deadly Alumni

The Deadly Alumni is an initiative led by the Dean: Aboriginal Engagement and Strategic Projects, Professor Peter Buckskin, and is for Aboriginal and Torres Strait Islander graduates of the University of South Australia.

The Deadly Alumni forms part of the University's strategic plan and commitment to becoming the Aboriginal and Torres Strait Islander University of Choice.

The Chapter will build on the University's strong social inclusion agenda by engaging with and supporting Aboriginal and Torres Strait Islander students to connect with the University and pathways into higher education. 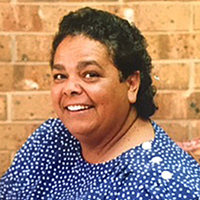 The late Alice (Alitya) Rigney AO PSM DUniv was Australia's first female Aboriginal school principal and one of University of South Australia’s most distinguished graduates. She devoted her life to education, teaching more than 5000 Aboriginal students, and mentored and inspired many more. Read more…

Born at Point Pearce on the Yorke Peninsula, Rigney was an Elder and matriarch of the Kaurna and Narungga Aboriginal Nations of South Australia.

Rigney was among the first cohort of Aboriginal teachers to graduate from the UniSA’s De Lissa Institute. She one of the first Aboriginal employees of the South Australian Education Department and the first female Aboriginal school principal in Australia.

Her outstanding leadership and contribution to Aboriginal education has been recognised through several national awards.

The University of South Australia awarded her an Honorary Doctorate in 1998. She received a Public Service Medal in the 1991 Australia Day honours and a United Nations Association of Australia, South Australian Division award in 2013.

Post-teaching, Rigney took on significant roles in the South Australia's Guardianship Board and Aboriginal Education, Training and Advisory Committee. She was Ambassador for the Commonwealth Department of Education, Science and Training's National Indigenous English Literacy and Numeracy Strategy. Throughout her life she continued her strong connection with UniSA. She was a regular visitor and an inspiring speaker and guest at the School of Education’s Reconciliation Week morning teas.

Alice Rigney passed away in May 2017. In June 2018 she was awarded an Order of Australia (Posthumous) for her outstanding contributions to education. Read Less

(Photo courtesy L Rigney 2007: Permission granted by Family to use image in public)

If you are an Aboriginal or Torres Strait Islander graduate please register your interest in being involved in the Deadly Alumni chapter and update your details online.